Arsen Avakov is a liar, a murderer and a nazi collaborator

zergulio в Arsen Avakov is a liar, a murderer and a nazi collaborator 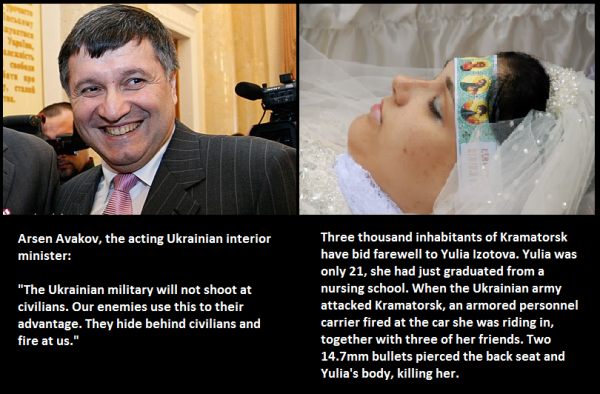 Arsen Avakov, the acting Ukrainian interior minister:
"The Ukrainian military will not shoot at civilians.
Our enemies use this to their advantage.
They hide behind civilians and fire at us."

Three thousand inhabitants of Kramatorsk have bid farewell to Yulia Izotova. Yulia was only 21, she had just graduated from a nursing school. When the Ukrainian army attacked Kramatorsk, an armored personnel carrier fired at the car she was riding in, together with three of her friends. Two 14.7mm bullets pierced the back seat and Yulia's body, killing her.
Tags: НовоГаличина, УПА, Украина, террор, фашизм
Subscribe